skip to main | skip to sidebar

A Broken Duck - or should that be Wasp?

Wow.  I mean, wow.  I can't believe what I've just seen, let alone had time for it to sink in yet.

Leeds Carnegie have not only won their first Guinness Premiership game of the season, they've also won their first Premiership away game since November 2005 and beaten London Wasps for the very first time.  Not a bad afternoon for my beloved team of "Premiership Whipping boys" and guaranteed yo-yo relegation fodder.  It's also three very good reasons to help explain why I'm sitting typing this in a state of mild shock and am contemplating taking a couple of headache tablets and having a little lie down.


It's true that today's game down in High Wycombe wasn't the prettiest game of rugby that you will ever see.  There were no tries, no twinkle-toed side steps or freeflowing champagne rugby on display.  Instead there was plenty of grit, determination and a solid performance of all the basics by the Leeds side, although Wasps minus the might of Phil Vickery seemed to fly around rather aimlessly, much like a bunch of dozy wasps intent on repeatedly smacking their faces against a window.


Wasps failed to get a solid platform from the scrum and this stopped them from successfully feeding the ball to their mouthwatering selection of backs.  Sackey, Lemi and Van Gisbergen barely saw the ball all day and instead spent most of the afternoon in B&Q, trying to find some elbow grease to help lubricate the creaking Wasps' scrum. Nippy half-back Joe Simpson made a couple of rapid breaks, but time and again any minor threat was dampened by Leeds who had invested in a job lot of insect repellent. 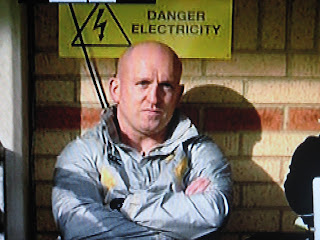 In contrast, the Leeds forwards all had an excellent day in the scrum and they completely owned the line-out.  Amusingly, the camera kept panning to an increasingly irritated looking Wasps coach Shaun Edwards on the bench, who seemed ready to implode as Leeds stole ball after ball.  Oh how it made me laugh.

However, it was at the breakdown where Leeds won this game.  Hendre Fourie aka Shrek had yet another excellent game, although I hope the powers that be down at Twickenham HQ aren't tempted to look any closer at the South African who now qualifies for England due to residency, as he is a key element in the Leeds pack.

The evergreen Andy Gommersall also had an exceptional game, and he used the difficult swirling wind to his advantage in the first half, by peppering spaces in the Wasps half with well placed box kicks.  And to think, I really didn't like him when he was at Gloucester.  Well Andy, I take it all back, I think you're alright.

Leeds went in at half time with a 12-6 lead, all thanks to the boot of Ceiron Thomas.  Paul Walder kicked all of Wasps points in a rather scrappy performance for the London outfit, whose only plus point of the game was the emergence from the bench of man mountain Simon Shaw who has been out with a long term foot injury.  Thomas kept his cool and traded penalties with Walder to end the game 9-15 and prompt all the Leeds squad to leap with joy and start a good few minutes of well deserved back-slapping. 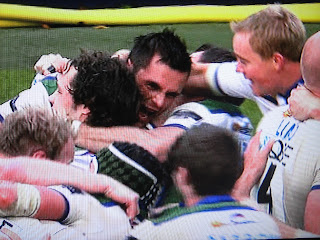 Woo!  Milky Bars are on me!


If Saracens can top the league by playing 'boring' gritty rugby, then I don't see why this won't do the trick in helping Leeds peel themselves off the bottom.  The gap to next placed Bath has been cut to two points with these two teams set to face each other in their first match of the new year at Headingley Carnegie on Saturday 2nd January.  Unfortunately I'm going to miss this game as I'll be dragging my decrepit body back from a New Year's Eve blowout in Brussels.  Mmm, chocolate.

Anyway, as the season progresses, Leeds will need to find the ability to turn periods of pressure into points and score tries rather than relying on the boot of their number ten to kick them to victory.  However if they can keep on getting the basics right like they did in the game today then they will definitely build a platform that will hopefully help them to avoid the pain of relegation.  Fingers crossed.
Posted by Bamberio at 21:36